In order to avoid car accidents on the heavily congested roads and highways in Los Angeles County, it's important for all vehicle drivers to obey California traffic laws.

The California Vehicle Code governs the rules and responsibilities of all drivers operating a car, truck, motorcycle or other types of motor vehicles on California's roads. 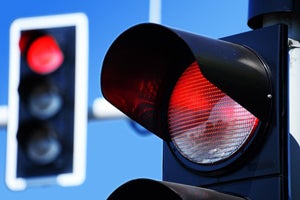 There is a reason these laws exist. They are specifically designed to maximize efficiency and safety on our state and federal highways. They are an attempt to minimize the danger of driving. Safety is the key concern, which includes avoiding car accident injuries.

When car drivers fail to obey these traffic laws, they often lead to car accidents, which can cause a wide variety of injuries.

The failure to obey California traffic laws can frequently result in the injured driver pursuing legal liability against the car driver who broke the law.

Since the vast majority of car accident lawsuits deal with the theory of negligence, failing to obey traffic laws will often form the basis in an accusation the at-fault car driver breached their duty of care to other auto drivers on the road.

Any car accident can happen at any moment, and driver error is a common cause of car collisions. This includes breaking the traffic laws.

When a Los Angeles car accident causes injuries and damages, the at-fault car driver can be held liable in California for these damages. If you file an accident claim, you could be entitled to receive compensation for financial damages including medical expenses, lost wages from work, and property damage.

It may also be possible to receive compensation for non-economic damages, which includes pain and suffering, emotional stress, and permanent disability.

If you have suffered an injury due to another driver breaking California traffic laws, you should consult with Injury Justice Law Firm LLP.

Our experienced injury lawyers will closely review the facts and circumstances of your auto collision in order to determine potential financial compensation.

It's important to note that California's statute of limitations limits the time you have to file a car accident claim. Therefore, you need to contact our law firm as soon as possible to discuss the specific details of you accident and your legal options for recovering money for your damages.

Now that we have discussed a basic overview of car accident injuries caused by traffic law violations, let's take a look at the most common ways violating California traffic laws can lead to auto collisions below.

California Vehicle Code 22350 states: “No person shall drive a vehicle on a highway at a speed greater than is reasonable, having due regard for weather, visibility, the traffic, and the surface and width of, the highway, and in no event at a speed which endangers the safety of other persons or property.”

Obeying the speed limit is typically the most prominent traffic law violation that results in Los Angeles car accident causing injuries. When a car driver travels at an unsafe speed for the current traffic conditions, it's often the main cause of an auto collision.

This is due to the negligent driver's inability to stop their vehicle before colliding with another driver.

The primary goal of speed limits is to provide safety by reducing the probability of a car accident. Speed limit signs will notify a driver of the maximum speed that is considered safe.

When a car driver fails to obey the speed limit, and travels faster that what is considered safe, it can easily cause a car accident with injuries.

California Vehicle Code 21703 states: “The driver of a motor vehicle shall not follow another vehicle more closely than is reasonable, having due regard for the speed of such vehicle and the traffic, and the condition of the roadway.”

By far, the primary cause of rear-end car accidents in Los Angeles County is following too closely to the vehicle in front of them.

This is due to the speed at which they are operating their car, truck, or motorcycle, is simply too fast for how far behind they are from another vehicle.

Obviously, the closer one car driver is to the vehicle in front of them, the slower should be travelling to avoid a car accident.

California Vehicle Code 21801 states: (a) “A vehicle driver intending to turn left or to complete a U-turn upon a highway, shall yield the right-of-way to all vehicles approaching from the opposite direction that are close enough to constitute a hazard at any time during the turning movement, and shall continue to yield the right-of-way until the turn can be made with reasonable safety.”

In Los Angeles County, the main cause of head on collisions and side impact accidents is the violation of this vehicle code on making left turns.

Typically, a driver is not quick enough in completing their turn, or they underestimate how fast oncoming cars are approaching before they can make their turn in a safe manner. It's important to note this vehicle code does not state the oncoming car driver has to yield to another car, truck, or motorcycle making the turn if at the time of the turn, there is no danger to other vehicles.

California Vehicle Code 21453 states: (a) “A driver facing a steady circular red signal  shall stop at a marked limit line, and shall remain stopped until an indication to proceed is shown. (b) Except when a sign is in place prohibiting a turn, a driver after stopping, facing a steady red signal, may turn right, but shall yield the right-of-way to pedestrians  and to any vehicle that has approached as to constitute an immediate hazard to the driver.”

Stop lights exist for a critically important reason. It's to let car drivers know they must stop and yield the right-of-way to other drivers. On the crowded roads of Los Angeles County, these traffic control systems are incredibly important for reducing car accidents at intersections.

The danger of failing to obey a stop light should be pretty obvious as running through a red light means the car driver is putting themselves in a position to collide with oncoming traffic that is traveling full speed and not expecting to see other drivers in their path.

When a car driver runs through a red light, it typically causes a side-impact car crash, commonly known as a “T-bone.” These types of car accidents frequently result to serious of catastrophic injuries, and even death.

If you have been injured in a car accident due to another driver failing to follow California traffic laws, contact our auto accident injury lawyers in Los Angeles for a free consultation.  Our goal is to help you recover the maximum amount of money for your claim.

Our attorneys will investigate your car accident and use all our resources to fight the insurance company for the at-fault driver, so you will receive a fair settlement for your claim. Call our law firm at 310-734-7974.