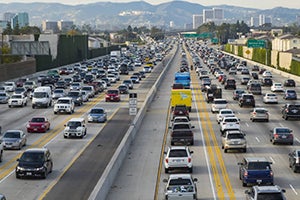 If you drive the 405, you're likely very accustomed to checking the traffic report when you are heading out. Your boss, coworkers, and friends understand that you're sometimes unavoidably late because of heavy, slow-moving traffic, gridlock, or another crash.

Being stuck in traffic is incredibly frustrating, of course, but it's a minor inconvenience, especially when compared to the distressing and even deadly accidents that take place regularly on this freeway. If you or a loved one has been involved in a collision on the 405, you might be searching for information on what to do next. We can help with that, so keep reading for the lowdown on Interstate 405 accidents

Known colloquially as the San Diego Freeway or the 405 Freeway, this interstate spans an area of Los Angeles stretching from Irvine in the south to San Fernando in the north. It's widely known as one of the busiest highways anywhere—it unequivocally holds that title within the state of California—and as the most congested freeway in the U.S.

Most drivers who traverse this stretch of highway are commuters and freight haul drivers, but it also serves the area airports, including LAX. Of course, plenty of tourists and visitors from around the world have traveled it as well. While locals are accustomed to this interstate's high traffic volume and inconvenient lane closures as just another aspect of their workday, it's akin to driving on the moon for tourists, especially those from smaller, less auto-centric countries.

This road plays a significant role in pop culture; it's been immortalized in song lyrics by A-list musicians like Kanye West, Lana Del Rey, and Death Cab for Cutie. On June 17th, 1994, it was the scene of the infamous slow-speed chase involving former football player O.J. Simpson and the police who would later arrest him for the murder of his ex-wife, Nicole Brown Simpson, and her friend, Ron Goldman.

What is it about the 405 that leads to so many accidents? There are myriad factors that contribute to this stretch of highway's high rate of collisions, of course, but a few of them are:

TYPES OF VEHICULAR ACCIDENTS ON THE 405

Given the high proportion of semi-trucks and other delivery vehicles, it's no surprise that truck accidents rank high on the list of most frequently occurring accidents on this road. Motorcycle accidents and crashes that involve passenger cars are also common. And because of Interstate 405's proximity to so many of Southern California's tourist attractions, accidents involving tour buses are not uncommon.

Pedestrian and hit-and-run accidents do not often occur on the 405.

Of course, just as on other dangerous roads across the U.S., DUIs are one of the major contributors to 405 accident statistics. So is texting—or using your smartphone for doing anything, for that matter—while driving. Reckless driving is another contributing factor.

Anyone operating a motor vehicle needs to pay attention to the road ahead, other drivers, truckers, and motorcycle riders, and their own speed and control, no matter where they may be traveling. However, if you're dealing with heavy rush-hour traffic on the 405, you must give your full, unbridled attention to the task at hand.

HOW AN EXPERIENCED AUTOMOBILE ACCIDENT ATTORNEY CAN HELP

If you've been injured in a serious vehicular accident, it's a smart idea to secure the services of attorneys who specialize in traffic accidents, whether those involve bicycles, motorcycles, trucks, or passenger cars. L.A.-area drivers should take it one step further and contact a local attorney—ideally, one who has both personal experience driving on Interstate 405 and a successful track record defending drivers who have been involved in Interstate 405 accidents.

They will be familiar with the 405's many exits, the communities through which it winds its way, and the typical tenor of California drivers. Having that experience in common with their client allows an attorney to thoroughly understand the backdrop of the accident with additional, time-consuming explanations. That means they can move faster and get right to the heart of the matter: seeking maximum compensation from the responsible parties for your loss and injuries.

Our two office locations are in Los Angeles County and the San Fernando Valley.

Our law firm offers a free case evaluation to assess your situation and determine the best way to move forward.