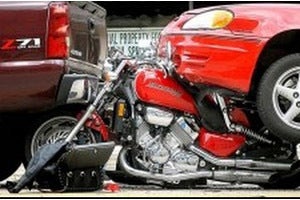 Rear-end motorcycle accidents in Los Angeles are just one type of accident that results in fatalities every year. Motorcycle riders who are stopped for a traffic light or just slowing down for heavy traffic congestion are at high risk of being rear-ended, a very dangerous type of motorcycle accident.

A rear-end crash is especially traumatic for motorcyclists, who frequently lack the protections that individuals have inside a car or a truck. Rear-end motorcycle accidents in Los Angeles typically occur when a motorcyclist is stopped at a red light and is struck from behind by another vehicle.

Frequently, the vehicle driver fails to notice the motorcycle or just misjudges the amount of stopping distance necessary to give the motorcyclist room. In many cases, being rear-ended by the passenger vehicle causes the motorcycle to either be pushed into oncoming traffic or thrown from the motorcycle.

If the driver of the vehicle demonstrated negligent behavior that caused a rear-end collision with your motorcycle, you could be entitled to compensation for any injuries.

See related blog: Do I Need a Lawyer After a Motorcycle Accident?

It is a fact that motorcycle riders are far more exposed to any dangers of the streets and freeways. Seeing how the motorcycle drivers are not protected by anything, except for helmets (unlike car owners, who have airbags, metal frames as well as seat belts), motorcycle accidents are more likely to result in harsh injuries or even death.

Yet, another dangerous type of collision that is somewhat similar to the head-on collision is the rear-end motorcycle collision, because it is unpredictable.

See our blog: Driver Errors That Can Lead To Serious Injuries.

When one vehicle hits the back of another vehicle, it is called the rear-end collision. Should the accident involve a couple of sedan vehicles or two SUVs, the consequences might be very minimal.

However, in the case of motorcyclists, rear-end collisions are the most detrimental of all. Should a car hit a motorcycle, it will lift the back wheel in the air in most cases, flip the bike and its driver forward, straight on the road. If it was a collision at high speed, there is always a danger that a passing car will not be able to stop and will run over the motorcyclist.

Should the motorcycle hit the back of the car, his motorcycle is going to stop, but the velocity will surely throw the rider forward. Therefore, the driver of the motorcycle may end up on the top of the car or perhaps on its front, which may also lead to several dangerous injuries.

In many motorcycle accidents in Los Angeles County, it is not uncommon for insurance companies to attempt to argue the motorcycle rider was at fault. Motorcycle riders are often stereotyped as reckless people, which is often unfair, especially when they were not at fault in an accident.

In most cases, the rear-end accident is entirely the fault of the vehicle drivers who rear-ended the motorcycle.

The driver of the vehicle might have been driving under the influence, distracted at the time of the accident, failed to stop at a red light, failed to respond to stopping traffic, lack of driver attention, or failed to follow traffic laws.

Even when all the facts and evidence are clear, a motorcycle accident victim might need an experienced accident lawyer who understands how to negotiate a fair settlement or take the case to trial if necessary.

It's important to keep in mind that insurance companies don't have the best interest of the motorcycle accident victim in mind.

Get Legal Help for Your Motorcycle Accident Case

The motorcyclists who were in a rear-end collision are usually suffering from harsh traumas, pricey medical treatment, and loss of income. If you were in a rear-end motorcycle collision, the first thing that you will need to do after checking out from the ER would get in touch with a qualified as well as experienced Los Angeles motorcycle accident attorney.

Only a lawyer will have the skills and the expertise to make sure that you get the compensation that you deserve and that the liable party is held responsible.

At our Los Angeles personal injury law firm, our motorcycle accident attorneys are dedicated to assisting accident victims to get the compensation needed to recover from their injuries. Our law firm has helped many injured motorcyclists recover maximum compensation for medical expenses, pain and suffering, lost wages from their job, and other damages.

If you or a family member was injured in a Los Angles County rear-end motorcycle crash, our lawyers may be able to recover compensation on your behalf. To find more about recovering monetary damages, call Injury Justice Law Firm LLP for a free case review by calling 310-734-7974 or by completing the contact form.

Were you injured in a rear-end motorcycle accident? Contact us now!