Bicycle commuting and recreational riding have become increasingly popular in Los Angeles County. People are frequently opting to ride their bikes instead of driving, and many cities are adapting with additional bike lanes and attempts to improve bicycle safety and awareness. 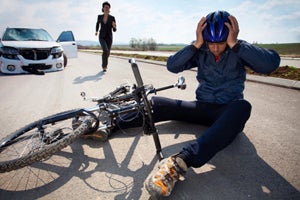 While there are a growing number of cyclists on the road, the potential for bicycle accidents and motor vehicle collisions have increased as well. Los Angeles residents know that an aggressive or distracted driver can cause a serious traffic collision, and bicyclist often sustain severe or even fatal injuries.

In 2014, the California Office of Traffic Safety reported over 2,200 fatal and non-fatal bike related accidents in Los Angeles County.

These accidents can result in serious and potentially catastrophic injuries for everyone involved. This is true primarily because cyclists are directly exposed to their surroundings, with no additional protection.

When a motor vehicle negligently collides with a bicycle, it often causes the bicyclist to flip, fall off the bicycle, and make direct contact with the ground, bringing about potentially devastating consequences, such as broken bones, severe abrasions, concussions, internal bleeding, herniated discs, fractures, traumatic brain injuries (TBI's), paralysis, or spinal cord injuries.

Motor vehicle operators are almost always at fault for colliding with bicycles. All too often, Los Angeles drivers fail to recognize or appreciate bicycle operators on the road and do not allow sufficient room for them on the roadway.

Oftentimes, the motor vehicle operator is simply unaware of the rules regarding bicycles on the road, or has little experience interacting and sharing the road safely with cyclists.

While a small distraction can seem insignificant to a motor vehicle driver, the result can be catastrophic when colliding with a cyclist. Even non-fatal injuries often require immediate medical attention, and result in escalating cost of treatment.

If you have sustained injuries in a Los Angeles bicycle accident involving a motor vehicle, you may be entitled to monetary compensation for your injuries.

In this situation, it is important to understand your legal rights and responsibilities. Our personal injury attorneys may be able to help you obtain the monetary compensation you are entitled to under the law.

We will need to closely examine all the specific details of the accident in order to determine your legal options.

Under California law, motor vehicle drivers owe a duty of reasonable care to other drivers and cyclists on the road.

This means that a driver must act in a manner that is reasonably prudent under the circumstances. When drivers breach this duty of care and accidents, injuries, and damages result, they can be held civilly (and sometimes criminally) liable for their actions or inactions.

With regard to cyclists and bicycle accidents specifically, California motor vehicle drivers must avoid the following:

Motor vehicle drivers must also be aware and do the following:

In bicycle accident cases, insurance companies will oftentimes dispute liability by alleging that the cyclist was fully or partially responsible for the accident, as well as for their injuries and damages.

Therefore, cyclists should follow the state of California Department of Motor Vehicles “Sharing the Road” recommendations and be sure to do the following:

Steps to Take After a Bicycle Accident

Even the most experienced cyclist can become involved in a serious vehicle collision. Obviously, seeking immediate medical treatment after a bicycle crash is your top priority even if you don't believe you sustained any serious injuries. In many cases, major injuries seem minor at first.

If you or a family member has been injured while riding, the following steps will help you better handle your bicycle accident and any resulting legal claim:

Bicycle accidents can lead to serious injuries, and are usually caused by negligent drivers.

Attempting to negotiate with an insurance company on your own is not a good idea, especially if you have sustained a serious injury.

If you have been injured in a bicycle accident – and especially if an insurance company is disputing or denying liability in your case – you need experienced legal counsel on your side every step of the way. When you get help from a skilled bicycle accident attorney, you are more likely to recover higher compensation than you could obtain on your own.

Insurance companies are primarily motivated to cut costs involved with settling a claim. They will often try to either deny claims outright or reduce the amounts to minimize their losses.

A lawyer is better positioned to investigate your case, prove liability and negotiate with the insurance company on your behalf. To schedule a free consultation and case evaluation with an injury lawyer, please call our law firm at 310-734-7974.