There are many reasons Los Angeles car accidents happen, including distracted or impaired driving.

However, there is one cause that our car accident lawyers encounter more often than any other reason. It's also something that can be avoided. It's simply impatient drivers. We have all observed drivers who are unforgiving on the road 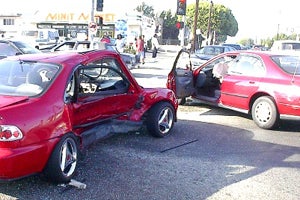 Their impatience is triggered for various reasons, and their driving has the potential to force others to take drastic action to avoid an accident so that they can save a few seconds.

Maybe they were stuck behind a slow-moving car or attempting to beat a red light. In many car accident cases, these drivers thought their actions were reasonable at the time.

However, countless severely injured car accident victims would argue the opposite.

On the busy roads and highways in Los Angeles County, it's not uncommon to hear of road rage or impatient driver incidents, which often lead to a car accident with severe or catastrophic injuries.

This is especially true during rush-hour traffic, where many drivers will take risks they would not usually take. The other drivers on the road are not typically prepared for such aggressive and impatient drivers.

The National Highway Traffic Safety Administration found that impatient and aggressive drivers were the number one reason other drivers listed who they encountered when driving.

These impatient driver numbers were even more significant than drunk drivers. In almost all of these car accidents, impatience is the crucial cause of the accident.

In many cases, a driver attempting to save a few seconds causes an accident that results in lost time from work, expensive medical bills, severe physical injuries, or even death.

If you have been injured in a car accident caused by a negligent driver, contact the Los Angeles car accident injury lawyers at Injury Justice Law Firm LLP.

Our attorneys will need to first closely examine your auto accident to determine the best legal options to obtain compensation for your medical expenses, lost wages, property damage, and other losses.

Let's take a closer look at exactly how impatient drivers can cause serious injuries below.

When a driver is rushing to their destination and doesn't have any patience to deal with other drivers, they often run red lights or ignore other traffic signals.

One of the most deadly car accidents is called a T-bone accident. These usually occur at an intersection, and aggressive or impatient drivers cause many accidents.

These car accidents often result in severe or catastrophic injuries because the impatient driver will normally accelerate rather than slow down when they see the light turn yellow.

This means they will be traveling through the intersection at a higher rate of speed. If your light has already turned green and you are proceeding through the meeting at a low speed, the impatient driver could collide directly into your vehicle.

Since the impatient driver travels much faster, your car will be struck with much greater force and may even overturn.

Furthermore, if your car is not equipped with side airbags, it could result in you suffering severe traumatic brain or limb injuries.

Failure to yield car accidents causing injuries in Los Angeles County happens in various ways. However, they all share a common theme; impatience. These types of auto accidents include:

Many areas in Los Angeles have a high rate of foot traffic.

Driving down a street with heavy foot traffic requires concentration. In many cases where a pedestrian is struck by a vehicle, aggressiveness and impatience are critical factors causing the accident. Quite simply, pedestrians crossing the street in a crosswalk have the right of way.

If you fail to yield, you will most likely be liable for the accident. Additionally, anyone who drives in LA County knows when traffic conditions are heavy; it's challenging to yield when merging onto a busy freeway. This can often result in an impatient driver cutting off other drivers in the right lane who have the right of way.

The result is often a rear-end or side-impact car accident that could cause severe neck injuries, such as whiplash.

If you have suffered a severe injury caused by another driver who failed to yield, call a Los Angeles car accident injury lawyer to review your options on recovery damages.

Weaving In and Out of Traffic

It's not uncommon to spot an aggressive and impatient driver making fast and unsafe lane changes on crowded highways.

Impatient drivers will frequently weave in and out of traffic traveling near the speed limit.

This substantially increases the risk of a car accident and often results in severe or catastrophic injuries, such as brain injuries, spinal cord injuries, broken bones, and neck and back injuries.

Tailgating car accidents in Los Angeles County often occur in heavy traffic conditions. Still, it's often the case that the heavy traffic prevents an impatient driver from weaving in and out of traffic lanes.

This road condition causes drivers to ride close to the rear of the vehicle in front of them.

This is prohibited under California law, as drivers are required to maintain a safe distance between themselves and the drivers in front of them. Failing to keep a safe space frequently results in a rear-end car accident.

If you rear-end the vehicle in front of you from tailgating, you will generally be 100% liable for the car accident and any injuries that occurred to the other driver.

On the 101 or 405 freeway, high-speed tailgating is especially dangerous because if you collide with another vehicle at a high rate of speed, you could quickly lose traction and spin out of control. This will often result in a chain-reaction car accident, resulting in multiple severe injuries and fatalities.

If you have been involved in a traffic accident anywhere in Los Angeles County, and you believe an impatient or reckless driver caused your car accident, call Injury Justice Law Firm LLP.

You could be eligible for compensation to help you pay for medical costs, car repair costs, lost income, and other expenses related to your car accident. Our injury law firm has helped countless injured victims recover the compensation they are entitled to.

Your first step is to contact our office to determine whether you have a case. You don't pay any fees unless we win your case. Call our law firm at 310-734-7974 for a free, no-risk consultation about your car accident.