How Can I Prove The Other Driver Was at Fault?

In Los Angeles County, car accidents are far too common and often severe. After a motor vehicle accident, an almost immediate question is…….who was at fault?

The answer to this very critical question can have a tremendous impact on the parties involved in the collision.

This also includes which party's insurance will pay for repair costs and other damages of the innocent party. Additionally, the at-fault party could be subjected to hefty fines and even criminal liability. To prove who was at fault typically requires determining who acted negligently. In many car accidents, it's pretty clear who was negligent. 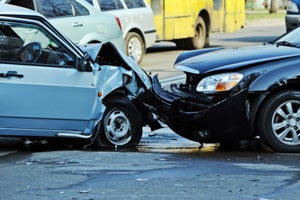 Frequently, common sense will tell you it was the other driver, a cyclist, or a pedestrian who caused the collision. There are situations where proving who was at fault is easy.

For example, proving fault in a car accident is clear-cut when one party has broken California traffic laws. This includes speeding, running a stop sign, failure to yield, and other specific laws. Another example is car accidents involving rear-end collisions and left turns.

In rear-end car accidents, California law supports the driver in front and applies if the at-fault driver was driving very close to your bumper, as frequently happens on busy Los Angeles County streets and highways when they become frustrated by a slow driver.

The concept is that the rear driver is responsible for remaining a safe distance between them and the front driver. In other words, they should know better than to tailgate.

In left-turn accidents, when one car is traveling straight and collides with a vehicle making a left turn, it's assumed that the left-turning driver is at fault as they entered the intersection without enough space and time to make the left turn.

The specific damage can identify these types of auto accidents to both cars. The other driver will simply admit fault in some cases, making a personal injury case much more accessible.

However, determining fault can become a more complex and highly debated issue in other car accident cases. Understanding the specific California driving laws can help your case, but there are various ways to establish liability. This can include police reports, witness statements, photos, traffic violations, cell phone records, and “no-doubt” liability.

If you have been injured in a car accident caused by a negligent driver, you should contact a Los Angeles car accident lawyer at Injury Justice Law Firm LLP. Our lawyers will need to review the details to determine your legal options closely.

Proving the other driver was at fault in your auto accident can be very challenging on your own, especially if your accident involves complex circumstances.

An experienced personal injury lawyer at our law firm will work aggressively on your behalf to obtain necessary evidence and present it to the other insurance company to seek a fair settlement. In accident cases where the fault is an issue, let's take a closer look at ways to prove fault in your car accident case below.

After a car accident, it's essential to call the police to write an accident report.

This report is critical evidence to show the insurance company and is typically used in negotiating. A car accident report is often a detailed account by the police officer and will contain what they observed, opinion on who was at fault, and how they believe the accident happened.

In-car accident cases where the police don't respond to the scene, you must make an accident report at your local police station. You should make sure to obtain a copy.

After your car accident, it's important to remember that obtaining as much evidence as possible can make a massive difference in determining fault.

If there were witnesses at the accident scene, ask them to write down a description of what they observed along with their contact information.

If able, you should take as many pictures as possible to support your version of the car accident.

Take photos of the accident scene, traffic signs, damage on both vehicles, skid marks, property damage, any conditions that may have been a factor, and your injuries. Remember, it won't take long for critical evidence to be removed.

Exactly where the vehicles are damaged is typically critical evidence in determining fault in a car accident. For example, if a car collides with you from behind, it's rarely your fault as the vehicle in the rear is supposed to leave sufficient room to stop.

Therefore, if your vehicle has damage to the rear, it's not difficult to determine who was at fault. However, where your car is damaged is essential in proving liability in T-bone or a broadside collision.

In Los Angeles County, a typical example would include a situation where one driver runs a red light and collides with the other vehicle on the side of the car.

The car with the broadside damage is not generally at fault because they passed through the intersection with a green light while the other vehicle ran the red light, causing the accident. In these types of car accidents, the location of damage of the car that was negligent will be on the front end.

Certain types of car accidents will almost always be one driver's fault. In these types of accidents, the insurance company will not usually argue who was responsible. In most cases, they will attempt a quick settlement.

For example, a left turn accident is almost always the fault of the driver making the left turn. Vehicles traveling straight into an intersection will generally have the right of way in most cases, making the vehicle turn left at fault for the accident.

If the vehicle going straight through the intersection is speeding or runs a red light, this could place some or all of the liability away from the left turning vehicle. Another typical example includes the previously mentioned rear-end car accident.

No doubt, liability often applies where one car collides with the rear-end. It will simply be assumed they were following too closely and were at fault.

If you have been injured in a car accident, proving the other driver was at fault can be difficult to prove by yourself. In many car accident cases, the evidence may not always be clear.

You should consult with a Los Angeles car accident attorney at Injury Justice Law Firm LLP to review the specific details of your car accident to determine your legal options moving forward.

Our experienced personal injury lawyers will aggressively work on your behalf to gather substantial evidence to obtain fair compensation. Call our law office for a free case evaluation at 310-734-7974.

Related blog:  Four Things to Do After a Car Accident