Can I Sue the Manufacturer if My Airbag Failed to Deploy in a Car Accident?

While airbags are designed to protect vehicle occupants from the most serious injuries, they don't always deliver on that 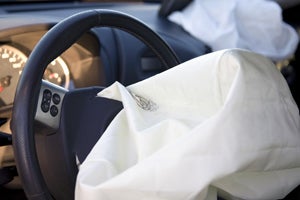 purpose. In fact, sometimes an airbag's failure to deploy can lead to catastrophic injuries if you're involved in a serious car accident in Los Angeles.

In some cases, you may be able to sue the manufacturer if your vehicle's airbag's deployment failure leads to serious injury or death in a wreck.

As provided by the U.S. National Highway Traffic Safety Administration (NHTSA), “Airbags reduce the chance that your upper body or head will strike the vehicle's interior during a crash.” Airbags are designed to protect the most important part of the human body, and when airbags fail to deploy in a car wreck, the injuries are often severe. Airbag deployment failure injuries can include:

How Airbags are Supposed to Work

The mechanics required in proper airbag deployment are not failproof, and both design and manufacturing defects can lead to malfunction.

Design and Manufacturing Defects in Airbags

It is a mistake to assume design defects and manufacturing defects originate from the same place. Instead, you should understand that different parties may be responsible for different defects.

Those injured can sue for an airbag design or a manufacturing defect, but the process is complicated and requires a nuanced understanding of who to make a claim or claims against.

What Can You Sue an Airbag Manufacturer For?

In a lawsuit for airbag manufacturing defects that caused you injuries in L.A., you can sue for compensation, including:

A successful lawsuit against an airbag manufacturer can yield economic relief that helps victims regain their financial and emotional well-being, but proving a manufacturing defect isn't easy.

In proving your case against an airbag manufacturer for failure to deploy, you'll need to successfully demonstrate that you sustained injuries because the airbag failed to deploy when it otherwise should have deployed.

The severity of the collision and the extent of your injuries will play an important role in proving the airbag default. If an airbag is recalled after your wreck, that could further prove that the manufacturer knew or should have known of the defect.

If your collision occurs after a recall has been issued, however, you may have a more difficult time proving the manufacturer's liability for your injuries after you received notice of the airbag's defective nature.

You have two years to bring a lawsuit against the manufacturer of a defective airbag under Section 335.1 of the California Code of Civil Procedure. The clock starts running when you experience the injury caused by the airbag. Due to the complicated nature of product liability cases, you shouldn't wait to commence the preparation of your lawsuit.

California imposes strict liability in manufacturing defects, meaning the injured party doesn't have to prove that the manufacturer was negligent in causing the defect.

Instead of proving negligence, a successful case will prove that the airbag was defective when it left the manufacturer's possession and that the victim was injured by their reasonable use of the airbag.