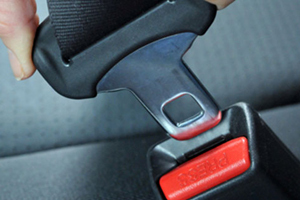 While seat belts are intended to protect passengers from harm in the event of an accident; unfortunately, many times defective seat belts may be the leading cause and/or a contributing factor to a serious injury during an car accident.

Seat belt and auto makers have a duty to design and construct seat belts that are crash worthy and/or are able to withstand the events of a potential accident.

However, frequently, seat belts fail to fulfill their intended purpose, which is to both keep passengers from colliding with objects in the car and to prevent passenger ejection from the automobile.

Ultimately, seat belts may cause a serious injury.

We Will Guide You Through The Process Of Filing A Claim

A time after an auto accident may be a confusing time for both the injured person as well as their loved ones, who may carry the burden of caring both physically and financially for the injured person. This is why, figuring out the claim procedure through a maze of insurance companies, may be difficult enough; let alone, determining the true cause of accident and/or injuries suffered.

This is why it is overly important to have an experienced Los Angeles personal injury attorney by your side. At Injury Justice Law Firm LLP, our lawyers will guide you through a complicated process of filing claims with insurance companies and will work with the best experts in the field, in order to determine whether a seat belt defect could have possibly caused and/or could have contributed to the injuries suffered in an auto accident.

Seat Belts Are Frequently A Contributing Factor Of Injuries

Normally, experts divide collision accidents into two phases: phase one where one vehicle impacts another vehicle and/or another object and phase two: where the impact of the vehicle causes the occupants to come into contact with the interior of the vehicle and potentially other objects (i.e., in the case of ejection).

It is during the second collision phase of an auto accident when seat belt failure can cause harm to a passenger. Just as with other safety devices, a seat belt is meant to minimize the injuries and damage caused in a second collision by reducing or eliminating contact between the passenger and/or the vehicle's interior. Nevertheless, seat belts frequently become the cause and/or a contributing factor of the injuries. Injuries due to seat belts often occur when there is a seat belt design, production or installation defect.

Types of Seat Belt Defects include:

Signs of a Possible Seat Belt Defect include:

Unfortunately, seat belt failure is still a significant problem that causes serious injury and death to many people in the United States. According to the National Highway Traffic Safety Administration, approximately 3 million people suffer injuries caused by seat belt failure every year.

Moreover, approximately 40,000 people die due to this preventable auto defect annually. In fact, experts have found that seat belt failure is one of the prime factors causing serious injury in accidents during which a vehicle flips over (i.e. rollover accident). Contact a Los Angeles personal injury lawyer at our office to discuss your case and legal options.

While these are the most common indicators and causes of seat belt failure in vehicle accidents, other circumstances may also indicate that such a defect is responsible for injuries and death. While a number of vehicles have been recalled due to seat belt failure, many people have not been adequately warned and protected from this preventable cause of injury.

Severe injuries which may be caused by defective seat belts:

Secondary injuries which may be caused by defective seat belts:

When seat belt failure/defect occurs in an accident and results in injury to a person, a victim has a legal right to seek compensation for their loss, pain and suffering through a legal claim. If you, or someone you love, have been the victim of injuries caused or exacerbated by a potentially defective seat belt, call a Los Angeles personal injury lawyer at our office, where an experienced Attorney Inna Gorin, will fight for your rights and get the best result possible under the circumstances. Contact our law firm at 310-734-7974 to review your case.