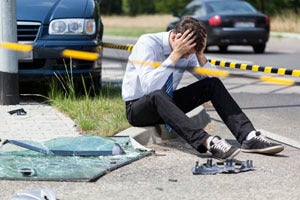 At Injury Justice Law Firm, we frequently receive calls from potential clients who sustained injuries in car accidents due to no fault of their own. However, most of the injured people do not realize that if they were uninsured at the time of the accident, their potential recovery for injuries may be limited, even if they are completely not at fault for the accident.

In 1996, the California legislature passed Proposition 213, which was mainly codified under California Civil Code Section 3333.4 (and is still commonly referred to as Prop 213) and was meant to punish people who did not have car insurance by creating certain penalties for the uninsured driver and owner of the vehicle.

Under Civil Code Section 3333.4, if the driver of the vehicle or the owner of a car involved in a car accident, did not carry a valid liability auto insurance at the time of the accident, California law prohibits such uninsured motorists from recovering non-economic damages.

Noneconomic damages are damages, which cannot be easily measured or quantified and primarily consist of reimbursement for pain and suffering, loss of companionship, loss of consortium (love of a spouse), and/or even disfigurement [Civil Code §3333.4(a)].

Therefore, uninsured motorist's recovery is limited to economic damages, i.e., compensation for out-of-pocket expenses, which he/she has incurred or may incur in the future as a result of the accident, i.e., medical bills, lost wages, repairs for physical damage to an automobile, future lost wages, and/or future medical bills.

Who is Considered An Uninsured Motorist Under Prop 213?

Prop 213 applies to both uninsured drivers and owners of the uninsured automobile(s). As has been described above, it is clear that if the driver is also the owner of the uninsured vehicle at the time of the accident, then his/her recovery for noneconomic damages may be barred.

The bottom line is that, although driven by someone else, if the owner of the vehicle did not carry valid liability insurance for his/her vehicle at the time of the accident, he/she would not be able to recover for noneconomic damages even though he/she was merely a passenger.

In California, spouses automatically acquire an ownership interest in an automobile that is acquired by the other spouse during marriage by the virtue of applicable California community property laws.

So, for instance, if a spouse who purchased the vehicle but failed to obtain liability insurance on the vehicle was driving and the other spouse was a passenger, the passenger spouse may be deemed an owner of the vehicle under community property laws and therefore unable to seek compensation for pain and suffering and other non-economic damages.

However, a spouse who did not know that the car was uninsured at the time of the accident, may still recover noneconomic damages even though the automobile had been acquired during the marriage and was deemed a community property asset.

Since each case is different and turns on its facts, with the help of an experienced personal injury attorney, an uninsured motorist may still be able to recover. At Injury Justice Law Firm, LLP, our team of experienced attorneys will examine each case based on its facts and may find an applicable exception in the law, which may still permit the uninsured motorist to recover fully for his or her injuries. Below is a brief list of exceptions that may apply to permit recovery despite Prop 213.

a) Innocent Spouse May still Recover Noneconomic Damages in An Automobile Accident due to her Injuries. Similar to the scenario set out above, where unbeknownst to the unsuspecting spouse, the other spouse failed to buy liability insurance, in a real case decided by California Appellate Court, it was determined that the unknowing spouse may recover noneconomic damages for her injuries. Ieremia v. Hilmar Unified School District (2008) 166 Cal. App. 4th 324.

In this case, the injured spouse was not aware of the car purchase by her husband and lack of liability coverage; she was convinced that the car was given to her husband at work for business-related trips. Hence, the wife was able to recover non-economic damages for her injuries suffered as a result of the auto accident even though their car was jointly held in community property and uninsured at the time the accident occurred.

b) Driver Insured but Injured Vehicle Owner not Insured: Non-economic damages are recoverable where the vehicle owner is uninsured but the driver is insured. In Goodson v. Perfect Fit Enterprises, Inc. (1998) 67 Cal.App.4th 508, in a wrongful death case a widower was able to recover non-economic damages whose passenger spouse had been killed in an accident involving their jointly owned uninsured vehicle, which was being driven by their daughter-in-law who was insured.

2. Showing that the Wrongdoing was also Caused by Wrongdoing Other Than Automobile Operational Negligence or Roadway Defect Negligence.

For example, in a product liability action against a car company, where it is alleged and proven that the vehicle was defectively manufactured or designed; an uninsured motorist was entitled to noneconomic damage recovery. In Hodges v. Superior Court (1999) 21 Cal.4th 109, an uninsured motorist suffered injuries as the result of a rear-end collision that caused the rupture of the gas tank of the Ford Mustang he was driving.

The motorist sued Ford, alleging that the gas tank was defective, the Supreme Court held that a “products liability claim against an automobile manufacturer falls outside the scope of . . . Section 3333.4 and entitles the injured uninsured motorist to recover noneconomic damages against car manufacturer only (and not the at-fault party).

However, the above exception does not apply when the injuries of an uninsured motorist were caused by a dangerous road condition created by a government entity. In stark contrast to the above-described exceptions, Civil Code Section 3333.4 prevents recovery of noneconomic damages by an uninsured motorist against a government entity for a dangerous condition or nuisance (motorcycle driver struck by a car in intersection obstructed by overgrown vegetation on government property) that caused or contributed to the accident. Day v. City of Fontana (2001) 25 Cal.4th 268].

3. Showing that Defendant Driver was Convicted of a DUI.

The uninsured injured party may avoid the consequences of Prop 213 if the driver at fault was convicted of driving under the influence under California Vehicle Code Section 23152 or 23153. However, if the at-fault driver can instead secure a conviction of a “wet reckless”, the injured party would still not be permitted to recover non-economic damages. Nakamura v. Superior Court (Orona) (2000) 83 Cal.App.4th 825, 832-833.