It was the day after Thanksgiving, 1991. In California's San Joaquin Valley, a six-year drought had led to extremely arid 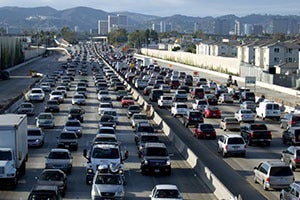 conditions. Normally a productive agricultural region, the fields north of Coalinga, CA had been left fallow due to the dry spell; with no plants or roots to help anchor the soil, the landscape was barren—except for a great deal of dry sand and dust.

It's impossible to quantify just how much dust, of course, but let's just put it this way: when it was stirred up that day by unusually high winds—a nearby weather station clocked them at 48 m.p.h, although there were anecdotal reports of even higher speeds —the resulting dust storm was so intense that it created near-zero visibility conditions in mere seconds. The dust storm, in turn, caused an incredible and devastating series of chain-reaction collisions on Interstate 5. In total, an astonishing 104 vehicles, clustered into roughly five separate pileups, were involved.

What On Earth Happened?

Not surprisingly, the Interstate 5 dust storm would go down in history as one of the worst vehicular accidents since the advent of the automobile. And it seemed to come out of nowhere, in no time flat; one moment, drivers were cruising along, perhaps en route to begin their holiday shopping—it was “Black Friday,” after all—or simply heading home after Thanksgiving travel. The next? Drivers were virtually blind, and the visibility was so bad. Then, for 103 of them, the terrifying sound and jolting impact of hitting another vehicle that they'd not even seen.

The din and crashing, incredibly, did not stop. As soon as one motorist would inadvertently slam into an invisible vehicle in front of them, more cars would materialize, some traveling at upwards of 50 miles per hour, and join the fray. Occasionally a semi would crash into a cluster of smoking vehicles or crush a compact car; one trucker steered his big rig into a ditch to avoid a certain collision with several other vehicles.

The pileup would eventually stretch over one and a half miles of I-5 and involve 104 vehicles (93 passenger cars and 11 tractor-trailers). Wreckage was later found as far as four miles away, on either side of the interstate. On the following day, 150 miles of I-5 were closed to through traffic as cleanup efforts began. But by far, the biggest toll would be the 17 deaths that occurred as the dust swirled over and around the mangled metal heaps and the additional 150 people who sustained injuries but survived.

It's not often that traffic accidents make history since they generally only involve a handful of unfortunate motorists and passengers. However, the 1991 Interstate 5 dust storm still looms large in the memories of its victims. It remains a fascinating chapter in California history, in addition to a cautionary tale about the need to conserve our environmental resources and practice responsible stewardship of the land.

It also resulted in extensive litigation, with many affected Californians blaming state and federal agencies for not having closed the road in time to prevent the deadly pileup.

The State of the Interstate Today

Unfortunately, the freeway is still a dangerous route to drive. Not because of dust storms, but simply due to the congestion. I-5 is one of the country's busiest roads. One stretch of roadway near Sacramento was the site of 13 deaths between 2017 and 2019, according to an analysis of data from the National Highway Traffic Safety Administration performed by the site MoneyGeek.

A few other findings about highway crashes from the same study:

Chances of experiencing another deadly dust storm like the one in 1991 are low—thankfully. Accidents due to other causes, however, will likely continue to affect motorists across California, including the particularly dangerous roadway that is Interstate 5.